We realise some people may be “unsure” if Physio is right for them. It could be that you’re not sure it’ll work, or whether we can help with what you’ve got, or maybe you had a bad experience somewhere in the past? If that sounds like you and you’d like to come in and see for yourself how Nose Creek Physiotherapy can help you, please fill out the short form below and tell us more about you so we can answer your questions:

It only makes sense that a healthy, active person will have a better chance of longevity than an out-of-shape couch potato. But science has proven it to be true. A study published in PLOS Medical by Steven C. Moore et al, was able to link levels of physical activity with mortality rates.

The study reported, “A physical activity level equivalent to brisk walking up to 75 minutes per week was associated with a gain of 1.8 years in life expectancy relative to no leisure time activity.”

And the more you move, the more you gain. People who get more than the recommended 150 minutes per week of physical activity can expect a gain of 3.4 – 4.5 years in life expectancy.

In addition, if you maintain a normal weight AND stay active, you’ll add 7.2 years to your life compared to being inactive and overweight.

The Internal Medicine Journal published a long-term 21-year study of runners aged 50 and up which showed marked differences between runners and a control group of non-runners. Nineteen years into the study, 15 per cent of the runners had died compared to 34 per cent of the control group. And, as the group aged into their 80’s, the health levels between the two groups continued to diverge.

Obviously running isn’t the only key to longevity. People who are active tend to lead healthier lives and adopt healthy lifestyles so these are contributing factors. But there’s no denying, regular exercise will give you a good chance at a longer life. If your leg joints are wearing out, then we recommend swimming, aquacize, and cycling as great modes of exercise to keep you healthy and not flare up your leg pain.

Blair Schachterle
Blair has been a Physiotherapist at Nose Creek Physiotherapy since 2001. Blair graduated from the University of Alberta with a BScPT in 1992. He has focused on Orthopaedic Manual Therapy and Sport Therapy. Blair completed his Sport Therapy Diploma in 1997, and his Advanced Manual and Manipulative Diploma in 1998. Blair is also certified for IMS (Intramuscular Stimulation) Dry Needling. Blair has a keen interest in active rehabilitation of recent and chronic, spinal and peripheral, joint and muscle injuries. He enjoys treating upper neck pain that is associated with cervical tension headaches, sciatica (pinched nerve in lower back), shoulder injuries and traumatic knee injuries. Blair previously served for 6 years as the Executive Chair of the Canadian Academy of Manipulative Therapy (CAMPT).

Blair balances his busy professional life by staying active. He enjoys cycling, swimming, working out, hiking, camping and snowboarding, depending on the season. Blair shares his free time with his wife, son and daughter outside on the weekends. He has learned to enjoy the journey, as life really is too short.

Type where it hurts here

"Almost Daily Health Tips From Physiotherapist Blair Schachterle..." Use the Form Below to Get Them All Sent to You for FREE

And We’ll Send You Our Best Advice And Top Tips In One Special Report...

It’s FREE! Just Look Below And Find The One That Works Best For You... 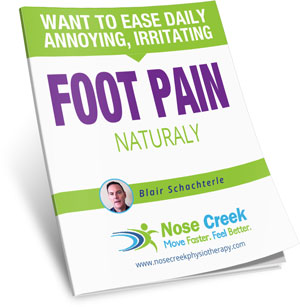